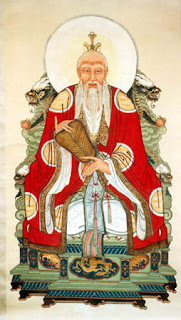 Lao Tzu’s date of birth is unknown. Many say it was between 600 and 300 B.C.E. He was known for his writing of the “Tao-Te Ching” (tao-meaning the way of all life, te-meaning the fit use of life by men, and ching-meaning text or classic). Lao Tzu was not his real name, but in honor of his name, it meant “Old Master”

He attracted many followers, but he refused to set his ideas down in writing. He believed that written words might solidify into formal dogma. He wanted his philosophy to remain a natural way to live life with goodness, serenity, and respect. He believed a person’s conduct should be governed by instinct and conscience.

He believed that human life is constantly influenced by outside forces. He believed “simplicity” to be the key to truth and freedom. He encouraged his followers to observe, and seek to understand the laws of nature; to develop intuition and build up personal power; to use that power to lead life with love, and without force.

People say that he was a contemporary of Confucius and served as curator of the dynastic archives until retiring to the mythical K’un-lun Mountains. He transmitted his teachings to a border guard who compiled the Lao-Tzu, also titled Tao-te Ching. His work was dated back to 4th to 2nd century B.C. It’s parables and verse advocate passive and intuitive behavior in natural harmony with the Tao. This is a cosmic unity underlying all phenomena. It emphasizes the value of wu-wei by which one returns to a primitive state closer to the Tao. This is a stage of creative possibility symbolized by the child or an uncarved block. It also promotes a laissez-faire approach to government.

Lao Tzu set off into the desert on a water buffalo leaving civilization behind. When he arrived at the final gate at the great wall protecting the kingdom, the gatekeeper persuaded him to record the principles of his philosophy for posterity. The ancient Chinese text is the world’s most translated classic next to the Bible.