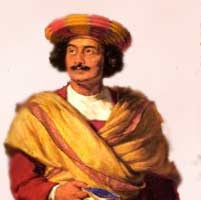 Raja Rammohan Roy has come to be called the ‘Maker of Modern India’. Without giving up what was good and noble in the past, he laid the foundations for a great future. He put an end to the horrible custom of burning the living wife with the dead husband. He was a great scholar and an independent thinker. He advocated the study of English, Science, Western Medicine and Technology. He spent his money on a college to promote these studies.

Brahmo Samaj
In 1828, a man named Raja Ram Mohan Roy (1772-1833) founded an organization called 'Brahmo Samaj'. Indian historians consider this organization forerunner which paved the way for reformation in India and its establisher as the 'father of modern India'. Raja Ram was a Brahman from Bengal. He was a British civil servant in India. He saw in British rule of India the best things that were benefical to India. He adored the west European philosophy of democracy, liberalism and humanism. He had a great interest in non- Indian cultures and religions. He was especially impressed by Christianity and other religions which preached the existence of one Almighty God.

Raja Ram and his organization 'Brahmo Samaj' tried to change the social order of India. He established newspapers and schools all around India. He convinced the British in 1829 to outlaw Sati. But during that period there wasn't yet an Indian ethos among the Indians. Indians were never one nation but always a collection of different entities. They were used to different rulers including non- Indians. From their point of view the British were just another ruler over them.But the main contribution of the Brahmo Samaj to the society of India was that it evoked issues that were common to people all around the Indian sub-continent. The notions of this organization were the inspiration for other organizations and various secular political parties, like the Indian National Congress, which were later on created in India 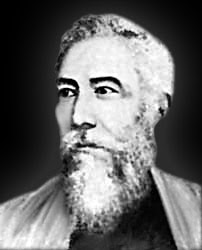 Born into a wealthy landowning family, Tagore began his formal education at the age of nine; he was instructed in India’s classical language, Sanskrit, in Persian, in English, and in Western philosophy. He became a close friend of his younger fellow reformer Keshab Chunder Sen. Tagore spoke out vehemently against suttee (self-immolation of a widow on her husband’s funeral pyre), a practice that was especially prevalent in Bengal. Together, Tagore and Sen attempted to raise the Indian literacy rate and to bring education within the reach of all. Unlike Sen, however, Tagore remained a more conservative Hindu, while Sen drifted toward Christianity. This philosophical break between the two men eventually resulted in a schism within the Brahmo Samaj in 1866.

Tagore, in his zeal to erase Hindu idolatry as well as divisive and undemocratic practices, finally rejected the whole of the Vedas, the ancient Hindu scriptures, claiming that no set of writings, however venerable, could furnish complete and satisfying guidelines to human activity. Failing to find a middle path between radical rationalism and fanatical Brahman conservatism, Tagore retired from public life, although he continued to instruct a small band of followers. In 1863 he founded Śantiniketan (“Abode of Peace”), a retreat in rural Bengal later made famous by his poet son Rabindranath Tagore, whose educational centre there became an international university. Until his death Tagore bore the title Maharishi (“Great Sage”).

Tagore’s voluminous writings were in his native Bengali. One of his books was translated into English, Vedantic Doctrines Vindicated (1845). His Brahmo-Dharma (1854; “The Religion of God”), a commentary in Bengali on the Sanskrit scriptures, is considered to be a masterpiece. 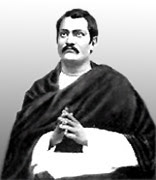 Although not of the Brahman caste, Sen’s family was prominent in Calcutta, and he received the required education. At age 19 he joined the Brahmo Samaj (Society of Brahmā, also translated as Society of God) founded in 1828 by the Hindu religious and social reformer Rammohan Ray. The Brahmo Samaj was intended to revitalize Hindu religion through use of ancient Hindu sources and the authority of the Vedas. Sen was convinced, however, that only Christian doctrine could bring new life to Hindu society.

By the use of dynamic and practical Christian missionary methods, Sen effected social reforms that were badly needed in India; he organized relief campaigns for the poor, promoted literacy among his countrymen by founding schools for children and adults, and issued a number of inexpensive publications to bring reading matter within the reach of all. He condemned child marriage and was instrumental in having the marriage rites of his society recognized by law in 1872. He also advocated widow-remarriage and even intercaste marriage.

While his contemporaries Debendranath Tagore and Ramakrishna remained thoroughly Hindu in outlook, Sen very nearly converted completely to Christianity. The deterrent proved to be his belief that Christ, however admirable, was not unique. Nevertheless, he did want his people to emulate Christ, believing that only a vital Christianity would be the salvation of a stratified and ossified Hindu society. He was more interested in the practical application of religion to social conditions than in depth of thought. An open break with Debendranath Tagore followed, and Sen formed a new society in 1866 called the Bharatvarshiya Brahmo Samaj (“Society of Brahmā of India”). The original society was renamed the Adi Samaj (“Old Society”) and was quickly purged of Christian teaching.

In 1870 Sen lectured widely in England and was presented to Queen Victoria. Again he was impressed with Christianity as a force in English life. Back in India, however, he allowed his 14-year-old daughter to marry the son of the maharaja of Cooch Behār, thus publicly repudiating his avowed opposition to child marriage. As a result, some of his followers broke away, and he organized a new society, Naba Bidhān, or Nava Vidhāna (“New Dispensation”), continuing to preach a mixture of Hindu philosophy and Christian theology. He revived many ancient Vedic practices and sent out 12 disciples to preach under a flag bearing a crescent, a cross, and a trident. Sen retained public esteem until his death.